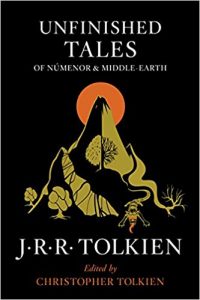 Join Corey Olsen, The Tolkien Professor, for an in-depth study of Tolkien’s Unfinished Tales of Númenor and Middle-earth! We will work our way through all four parts of the book in ten weekly sessions.

Published in 1980, Unfinished Tales was the first attempt by Christopher Tolkien to make his father’s incomplete stories available to the public. Rather than trying to pull the tales together into a narrative whole like he did with The Silmarillion, Christopher presented the unfinished stories as they were (or with some light editing) and provided a commentary to each one that provided a fuller picture of where the tales fit into the development of his father’s legendarium. While the Unfinished Tales are themselves worthy of study, the success of the book also showed that there was still a significant appetite for Tolkien’s work, essentially paving the way for publication of the 12-volume History of Middle-earth series.

Like all Mythgard Academy seminars, this series is free and open to the public. You can download audio or video recordings of the sessions on our YouTube channel or through our Mythgard podcast feed. This is part of the series of open and free seminars made possible by the generosity of the people who contributed to our fundraising campaign. The subjects of our Mythgard Academy sessions are nominated and elected entirely by our generous supporters. In this round, Unfinished Tales narrowly edged out Ender’s Game by Orson Scott Card, Neverwhere by Neil Gaiman, and Watership Down by Richard Adams.

If you missed our fundraising campaign but would still like to take part in this exhilarating democratic process to decide our future topics, it isn’t too late! You can join in the action by donating to Signum University today!

Class 1: Of Tuor and the Cracks of Doom

Class 2: Of the Dooms of Túrin

Class 3: Limping Wisdom and the Feet of Doom

Class 4: More on the House of Hador

Class 6: The Metahistory of Galadriel

Class 10: The Folly of the Fallen

Class 11: Filling Up the Corners

Class 12: The History of Wizards

Class 13: The Lost Stones of Gondor and Arnor

Artwork for the Unfinished Tales seminar was adapted from Ted Nasmith’s Túrin and his Band are Led to Amon Rûdh. Used with permission.