The Book of Lost Tales, Part 1 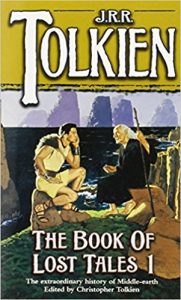 Join Dr. Corey Olsen, the Tolkien Professor and President of Signum University, for an in-depth nine-week study of The Book of Lost Tales, Part 1, the first volume in Christopher Tolkien’s 12-volume History of Middle-earth series.

The first of two books looking at the earliest versions of Tolkien’s legendarium – stories which later grew into what would eventually become The Silmarillion – BOLT I (as it is commonly abbreviated) follows the development of the tales themselves as well as the connecting narrative, which is takes place at the Cottage of Lost Play where the tales themselves are told each night. In addition to the stories and frame, Christopher Tolkien offers textual notes and commentary to help place each tale in historical context as well as in context of the development of the overall legendarium.

As part of the Mythgard Academy series, this seminar is free and open to the public.  The first 100 participants for each session are able to participate in the discussion live, and both video and audio recordings of the classes will be available through the Mythgard podcast feed and YouTube.

The Book of Lost Tales, Part 1 is available from Amazon. It can be purchased in hardcover, paperback, or electronic formats.

As part of the Mythgard Academy series, the class is tuition-free and open to the public. The first 100 participants for each session are able to participate in the discussion live, and both video and audio recordings of the classes will be available on this web page, through the Mythgard podcast feed, and on our iTunes U course.

Like all Mythgard Academy classes, this course is made possible by the generosity of everyone who supported our fundraising campaign last fall. The topics of our Academy classes are nominated and elected entirely by our generous donors. After their first foray into science fiction with Orson Scott Card’s Ender’s Game, the Mythgard Academy electors have turned back to Tolkien, choosing to follow up this winter’s popular study of Unfinished Tales with The Book of Lost Tales, Part 1.

If you missed our fundraising campaign but would still like to take part in our class voting process to decide our future topics for the rest of the year, it isn’t too late! Visit our donation page and help support our free classes!

Schedule for The Book of Lost Tales, Part 1

Class 1: The Cottage of Lost Play

Class 2: The Dawning of the Gods

Class 3: The Choices of the Valar

Class 5: The Darkening of Hearts in Valinor

Class 6: The Misadventures of the Gods

Class 8: The Spell of Bottomless Dread

Artwork for The Book of Lost Tales, Part 1

Artwork for The Book of Lost Tales, Part 1 was adapted from “At Lake Cuiviénen” by Ted Nasmith. Used with permission.