The Lost Road and Other Writings 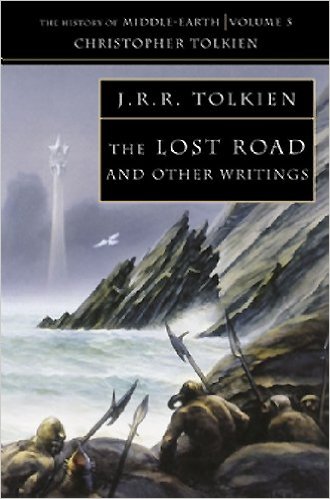 Join the Tolkien Professor (Dr. Corey Olsen) and Mythgard Academy for a look at the fifth volume of the History of Middle-earth (HoME) series, titled The Lost Road and Other Writings, with a free, nine-week seminar.

Previously, the Academy explored the first four volumes in the HoME series, The Book of Lost Tales, Part I, The Book of Lost Tales, Part II, The Lays of Beleriand and The Shaping of Middle-earth. Now, the Council of the Wise and Signum University supporters have chosen to continue this in-depth study of the development of J.R.R. Tolkien’s world of Middle-earth.

Originally published in 1987, The Lost Road and Other Writings contains the eponymous tale of “The Lost Road,” which was written as a sort of contest between J.R.R. Tolkien and C.S. Lewis in which each would write a science fiction story. Tolkien chose the subject of time travel for his story, while Lewis’ story turned out to be the kernel of what eventually became his Space Trilogy (which is explored, along with “The Lost Road” in Signum University’s Inklings and Science Fiction course). Although Tolkien never finished his story, some have seen his later “Notion Club Papers” as an attempt to return to the same device and theme.

The Lost Road and Other Stories contains, of course, other stories as well, most of which are early versions of the stories that eventually ended up in The Silmarillion. These include “The Fall of Númenor” (later the Akallabêth), annals of Beleriand and Valinor, the Ainulindalë (The Music of the Ainur), the Lhammas (“Account of Tongues”), and the Quenta Silmarillion. For those who took Signum’s class on invented languages, The Lost Road and Other Stories also contains an etymological dictionary of Elvish languages.

As with all Mythgard Academy seminars, this series is free for all and open to the public. Each session, the first 100 participants will be able to participate in the live discussion. For those who cannot attend live, both video and audio recordings of each discussion will be available on this web page and on our iTunes U course and on the Signum University YouTube channel.

This seminar is made possible by the generosity of everyone who has supported the Mythgard Institute and Signum University through their generous donations. The books studied during our Academy discussions are nominated and elected by donors. Earlier this year, in addition to continuing our saunter through The History of Middle-earth, we explored the gothic horrors of Bram Stoker’s Dracula, and after The Lost Road we will be taking to the stars to explore the galactic landscapes of Ursula K. Le Guin’s The Dispossessed.

If you would still like to take part in our voting process to decide our future topics for the rest of the year, it isn’t too late! Visit our donation page and help support our free seminars!

Schedule for The Lost Road

Week 4: Prepping the Silmarillion for Publication

Week 5: The Tree of Tongues

Week 6: The Final Draft of the Early Silmarillion

Week 9: The End of the Silmarillion

Artwork for The Lost Road

Artwork for The Lost Road and Other Writings was adapted from “Queen Tar-Miriel and the Great Wave” by Ted Nasmith. Used with permission.