The Lays of Beleriand 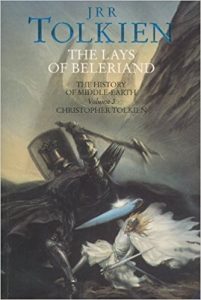 Join Dr. Corey Olsen and the Mythgard Academy as they return to the History of Middle-earth for an open seminar on J. R. R. Tolkien’s The Lays of Beleriand, the third book in the series.

Earlier this year, we went back to the beginning stages of Tolkien’s created world with The Book of Lost Tales Part 1 and Part 2. Written in his early twenties in the aftermath of WWI, the Lost Tales were Tolkien’s first attempt to bring his stories together into a consistent mythology. As he neared the end of the work, Tolkien’s ideas about the Lost Tales began to shift, and rather than reworking the whole collection, he abandoned it, turning instead to the fleshing out of the chief and most important of the stories from the collection, especially the tales of Turambar and Tinuviel. In The Lays of Beleriand, we will see Tolkien making his first attempt at developing a long story, and to make it even more fun, he was doing it in verse! The Lays of Beleriand is one of Tolkien’s least read and most underappreciated books; make sure to take advantage of this opportunity to read through it in good company!

The History of Middle-earth, Volume 3 is available from Amazon. It can be purchased in hardcover, paperback and electronic formats.

As part of the Mythgard Academy series, the seminar is tuition-free and open to the public. The first 100 participants for each session are able to participate in the discussion live, and both video and audio recordings of the sessions will be available on YouTube and the Mythgard podcast feed.

Like all Mythgard Academy seminars, this course is made possible by the generosity of everyone who supported our fundraising campaign last fall. The books are nominated and elected entirely by our generous donors. After taking a tour through the land of Florin in The Princess Bride, the Mythgard Academy electors – also known as the Council of the Wise – have turned back to Tolkien, choosing to continue our exploration of the History of Middle-earth with The Lays of Beleriand.

If you missed our fundraising campaign but would still like to take part in our voting process to decide our future topics for the rest of the year, it isn’t too late! Visit our donation page and help support our free discussion!

Schedule for The Lays of Beleriand

Week 3: Of Increase and Digression

Week 5: The Echo of a Spell

Week 9: The Echoes of the Lays

Artwork for The Lays of Beleriand

Artwork for The Lays of Beleriand was adapted from “Lúthien” by Ted Nasmith. Used with permission.