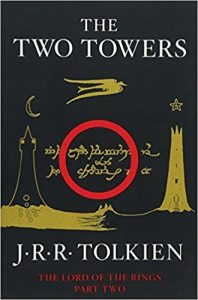 Join Corey Olsen, the Tolkien Professor, on a four-week, eight-session journey through The Two Towers, volume two of J.R.R. Tolkien’s epic novel, The Lord of the Rings.

Two Towers is the continuation of the stories of Frodo, Sam, Merry and Pippin and their divided adventures as Sauron, the dark power seated in the land of Mordor, extends his reach across Middle-earth looking for the powerful Ring that will help restore his power and allow him to claim the entire land for himself. Separated by internal and external conflict at the end of the previous book, the hobbits must each discover own small ways of helping the free peoples of Middle-earth in their struggle against the rising darkness, while those of greater stature – both physically and reputationally – bear the brunt of Sauron’s focus and attack.

In our discussions, we will work our way through the book a few chapters at a time, paying special attention to the mythic elements in Tolkien’s story.  The seminar is open to everyone, and recordings will be posted afterwards. This series is the pilot seminar for the new Mythgard Academy seminars, free educational discussions organized and hosted by the Mythgard Institute (The Fellowship of the Ring having been a paid course.) If this kind of seminar seems like a good idea, and if you would like to have a vote in deciding what other books we read and discuss together, you might want to participate by donating to Signum University.

Schedule for The Two Towers

Class 1: The Mending of the Fellowship

Class 2: The Making of Myth

Class 4: The Wisdom of Isengard

Class 5: The Choices of Mr. Frodo

Class 7: Over the Threshold

Artwork for The Two Towers

Artwork for The Two Towers seminar was adapted from “The Mûmak of Harad” by Ted Nasmith. Used with permission.