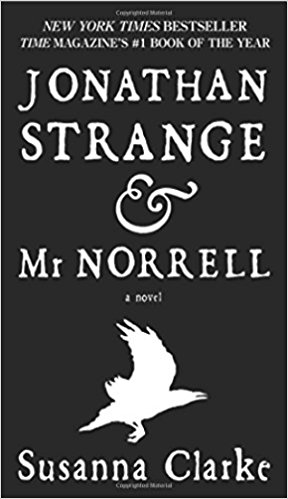 In particular, the story explores the return – or perhaps revival is a better word – of British magic through the study and practice of the eponymous characters. Sometimes mentor and student, sometimes rivals, Strange and Norrell each play a significant part in the magic’s restoration in Britain, and through their characters (along with a host of secondary and minor characters) Clarke is able both to draw on and to subvert various traditions of English literature, including Romanticism, Gothic tradition, fairy tales, Arthurian legends, and of course the styles of great 19th century British writers such as Dickens and Austen. In addition to the story itself, Clarke manages to insert nearly 200 footnotes and references to an impressive array of fictional books of magic (and magic history) that give an authentic illusion of history second perhaps only to Tolkien’s.

Coming off the recent popularity of the BBC miniseries adaptation, this is a great time to delve into a book that has become something of a classic in a relatively short amount of time. First published in 2004, this is by far the most recent book that we’ve looked at in the Mythgard Academy series to date. Dr. Olsen will be forced to dust off and re-don his Modern Fantasy cap (it’s slightly less pointy than older fantasy caps).

Jonathan Strange & Mr Norrell is available from Amazon and many other outlets.

As with all of our Mythgard Academy seminars, the discussions are open to anyone and everyone, with no payment required. We reserve 100 spots on a first-come basis for each live session, and every session both video and audio recordings of the sessions will be available through the Mythgard podcast feed and our YouTube channel.

This series is made possible by the generosity of everyone who supported our fundraising campaign last fall. The topics of our Academy discussions are nominated and elected entirely by our generous donors. So far this year we’ve adventured through the land of Florin in The Princess Bride and studied two volumes of The History of Middle-earth series: The Book of Lost Tales, Part II and The Lays of Beleriand. Now, the Mythgard Academy electors – also known as the Council of the Wise – have deemed Jonathan Strange & Mr Norrell to be our next doom.

For those who would like to be on the Council that chooses the books we will look at in the upcoming year, our fundraising campaign will begin on Sept. 22 (also known as Hobbit Day). As always, you can visit our donation page at any time to help support our efforts at providing free, high-quality studies of speculative fiction!

Week 1: The Discovery of English Magic

In the first session, we discuss the intricacy of Susanna Clarke’s subcreation, examining how she creates the “impression of depth” through her fidelity to the style and tone of 19th century British literature and through the detailed presentation of a convincing alternative history. Special attention is paid to the book’s presentation of magic, the treatment of Færie, and the introduction of the staid and miserly Mr. Norrell.

In week 2, we discuss the dramatic discrepancy between how London society actually views magic and how Mr. Norrell wishes them to see it. In doing so, we explore Mr. Norrell’s first meetings with characters such as Mr. Drawlight, Sir Walter Pole, Captain Harcourt-Bruce, and the Gentleman with the Thistle-down Hair and their varied reactions to both Norrell and his proposed revival (or redefinition) of English magic.

Week 3: The Emancipation of English Magic

In Week 3, we explore the role of the abolition movement and the theme of emancipation in the novel’s subtext and in adding depth to the character of Stephen Black. We also take a look at the character and motivations of the Gentleman with the Thistle-down Hair, the resurrection of Lady Pole, and the prophecy given by street magician Vinculus.

Week 4: The Growth of English Magic

In week 4, we discuss the role of Vinculus and his book, and take a detailed look at his interactions with Childermass in the Tarot card reading episode. In addition, we are finally introduced to the eponymous Jonathan Strange and explore the odd presentation of his backstory via the perplexing tale of his father Lawrence Strange’s vendetta against the servant Jeremy Johns.

Week 5: The Digestion of English Magic

In Week 5, Jonathan Strange meets the emphatically practical Lord Wellington and performs questionable magic on the Iberian peninsula. We also discuss how Mr. Norrell shows his most endearing qualities just as he sinks to his most petty and selfish depths.

Week 6: The Dispute Over English Magic

In Week 6, we find surprising sympathy with Mr. Norrell and the Gentleman with the Thistle-down Hair. Jonathan Strange travels the King’s Roads and becomes ever more enchanted with Faerie and the magic of the Raven King, while Mr. Norrell gives new perspective on his reasons for resisting them. Finally, we look at the Gentleman’s admiration of Stephen and his special relationship with nature.

Week 7: The Boundaries of English Magic

In Week 7, we question whether the Raven King is the true protagonist of the novel, and examine the trajectory swap of Strange and Norrell which pivots around his magic. In addition, we explore the Gentleman’s seduction and capture of Arabella, the increasingly porous borders between the human realm and Faerie, and the incident of Childermass’ shooting.

Week 8: The Madness of English Magic

In Week 8, we discuss the increasingly complex relationship between madness and magic, the hilariously intertextual role of Lord Byron, and the glory and burden of Stephen Black.

Week 9: The King of English Magic

In Week 9, we return to the fundamental question: “Just what is English magic?” We also look at the fates of Drawlight and Lascelles, the importance of Segundus and Childermass, and explore the aptly-named Starecross Hall.

Week 10: The Return of English Magic

In our final discussion of the book, we finish Susanna Clarke’s novel and take a close look at the story’s bittersweet and strange ending. Particular attention is paid to the conflict between the Raven King and the Gentleman, the destiny of Stephen Black, and the fates of Strange and Norrell.

Want to support the work that the Mythgard Institute does for fantasy and other imaginative literature? Consider making your own donation today!