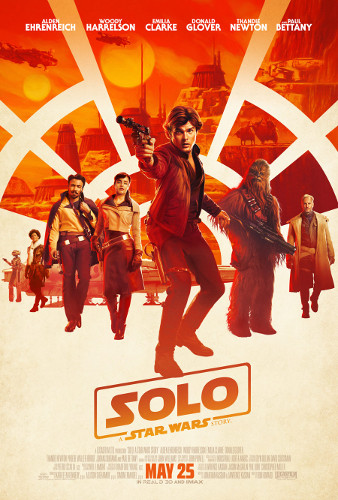 Join the Mythgard Movie Club on June 14, 2018, at 8:30pm ET for a discussion on Solo: A Star Wars Story. Written by  Jonathan and Lawrence Kasdan and directed Ron Howard, Solo is the second “anthology” film of DisneyLucasFilm (the first having been Rogue One), and it focuses on the character and adventures of a young Han Solo, well before he met a starry-eyed farmboy and a fiery princess.

Coming off a slate of production problems – including the firing of original directors Phil Lord and Christopher Miller – expectations for the film are relatively low, at least in comparison with other films. The script was started by Lawrence Kasdan, a well-known name in the Skywalker saga, having taken over the script for The Empire Strikes after the death of Leigh Brackett, and then going on to write The Return of the Jedi and The Force Awakens. When Lawrence left Solo to write The Force Awaken, he handed it off to his son, Jonathan Kasdan, although Lawrence later returned to the project. Other rumors about the movie’s struggles have abounded, such as the need to hire an acting coach for lead actor Alden Ehrenreich, and a perceived delay in marketing for the film – though that likely has more to do with its proximity to the release of The Last Jedi than any actual problems. For all its faults, real or perceived, the movie will premiere at the Cannes Film Festival on May 15, 2018.

We hope you will join us live and participate in the discussion on June 14.

Curtis Weyant is a Signum Grad School alumnus who was born in The Year of the Force, making him a Chosen One of some kind – though of what type, exactly, remains to be seen. He read The Han Solo Adventures and The Lando Calrissian Adventures as a Star Wars-hungry teenager, but he promises not to let those stories prejudice his analysis of the Solo film (too much). Along with Kat Sas, he co-hosts the weekly podcast Kat & Curt’s TV Re-View, in which they discuss episodes of various speculative television shows including Buffy the Vampire Slayer, Angel, Doctor Who and Battlestar Galactica.

David Maddock is a software engineer by day and a MA student at Signum by night like a really nerdy, out of shape Batman who fights no crime. So, regular insomniac, I guess. Screen time ruins your circadian rhythm kids!