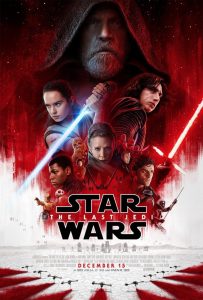 Join the Mythgard Movie Club on January 10, 2018, at 8:30pm ET for a discussion on Star Wars: Episode VIII – The Last Jedi. Written and directed by Rian Johnson, The Last Jedi is the latest installment of the Skywalker Saga, which resumes the story not only of Luke, Leia, Chewey and our favorite droids, but also continues the tale of the next generation of Force-wielders, heroes and heavies including Rey, Finn, Poe, Kylo Ren/Ben Solo and of course, Supreme Leader Snoke.

For fans and critics alike, The Last Jedi represents a keystone moment in the latest Star Wars trilogy. The Force Awakens opened two years ago to a lot of excitement, and although the movie was generally successful in capturing the tone of the original Star Wars movie (retconned as “Episode IV”) while introducing a bevy of new characters to carry the series’ lasertorch, many criticisms of the film remain valid, such as its heavy reliance on the original movie’s plot structure. Furthermore, the success of last year’s Rogue One, which was a much darker film focusing on an almost entirely new cast of characters, could put even greater expectations on the newest installment, given Episode VIII’s position as the second movie of a trilogy: If Johnson and the crew at Disney are intent on following the original trilogy’s formula for success, then The Last Jedi is likely to take a dismal turn. Whether the team lives up to the expectations set by Rogue One, and not quite met by The Force Awakens, remains to be seen.

The Last Jedi is the first new release to be discussed in our Mythgard Movie Club series (and the first of two Star Wars films we will be looking at in 2018!). For this discussion we have reassembled some of the original crew from last year’s Signum Symposia chat “One Fantastic Rogue Beast” on Rogue One and Fantastic Beasts and Where to Find Them – Kat Sas, Curtis Weyant, Emily Strand and Kelly Orazi – and brought in two new panelists for additional perspectives, Dominic Nardi and David Maddock.

We hope you will join us live and participate in the discussion on January 10.

Curtis Weyant is a Signum Grad School alumnus who was born in The Year of the Force, making him a Chosen One of some kind – though of what type, exactly, remains to be seen. He read most of the Star Wars Legends stories before they were Legends, and obsesses over drafts of the original Star Wars script in has spare time. Along with Kat Sas, he co-hosts the weekly podcast Kat & Curt’s TV Re-View, in which they discuss episodes of various speculative television shows including Buffy the Vampire Slayer, Angel, Doctor Who and Battlestar Galactica.

David Maddock is a software engineer by day and a MA student at Signum by night like a really nerdy, out of shape Batman who fights no crime. So, regular insomniac, I guess. Screen time ruins your circadian rhythm kids!